Designing a security solution is not always a straightforward task. Balancing design and effective protection can often be difficult for landscape architects, security officials, and urban designers. Yet, in recent years, there has been an increase in innovative design solutions to security concerns in cities all over the world. These solutions are effective when it comes to protecting citizens from vehicle as a weapon (VAW) attacks, while adding aesthetic value and utility to a space. Below are six examples of design solutions to terror threats that prove security solutions do not have to be hostile. Cities throughout the world have made use of military-style barriers to prevent VAW attacks. However, Stefano Boeri, an Italian architect known for his plant-covered architecture, believes trees and planters can be used as barriers just as effectively. Dario has been a long-time advocate for integrative security design and has voiced his concerns about the negative impact of the barriers being installed in European cities. “The safety of these places is urgent and appropriate, but we cannot allow safety to transform thousands of squares and public spaces in Europe to become sites of barriers and concrete blocks, as if they were military checkpoints,” said Boeri in a statement after attending a workshop with a group of architects at Florence’s town hall, the Plazzo Vecchio. His unique HVM (hostile vehicle mitigation) solution is now set to be implemented in Florence, thanks to the support of mayor Dario Nardella. Nardella hopes that cities across Italy and Europe will follow Florence’s lead. “We need more security without sacrificing the beauty and identity of our cities. This is why we continue with plans to defend the city with planters and equally effective solutions, instead of ugly concrete barriers.” said Nardella. “I think Florence has a responsibility to embody the role of a symbolic city, where we must combine the security of our citizens with the beauty of the city.”

Last month, Italian news site ANSA reported that a row of “anti-terror flowerpots” had already been installed outside the Quirinale Palace in Rome following the attacks in Barcelona. On top of his flowerpots, Boeri proposed a range of street furniture – ranging from bicycle racks to benches – which would simultaneously work as barriers to VAW attacks and improve the functionality of the public space. “They will operate as useful elements of urban furniture – benches, bicycle racks and smart device stands – and will be designed as modular elements, assembled in order to ensure maximum flexibility in relation to the different types of public spaces to be secured. Our response to the hatred of terrorism is in art and beauty,” says Nardella.

The new security requirements enforced by the NYPD Counterterrorism Division after 9/11, resulted in the scattering of hostile security measures all around the New York Financial District and New York Stock Exchange. The US has since embraced the opportunity to rethink urban security strategies and leverage their need to improve the public experience around the historic urban space. One of the designs included the bronze “NOGO” barriers by Marvel (marveldesigns.com). These barriers are easy to redeploy and can be used where dense subsurface utilities do not permit bollard foundations. The design was the result of a thorough evaluation of the problem and after careful coordination with city agencies, law enforcement officials, and stakeholders, Marvel’s goal was to integrate financial, cultural, and historical landmarks into the security plan.

3. Adapt by Nordic Offices of Architecture and Haptic 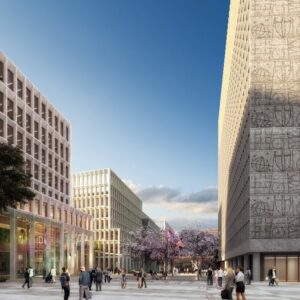 The part of Oslo’s government quarter which was damaged during the 2011 terrorist bombing, is set to be replaced by a new complex, designed by Oslo from Nordic Office of Architecture and London studio Haptic. The architects are working with engineering firm Ramboll and landscape studios SLA and Bjørbekk & Lindheim. The design is made up of seven block buildings containing 4,500 workplaces, which will be surrounded by parks, squares, cafes, and a visitor centre to provide a place for its citizens to enjoy. While most of the buildings will have flat roofs, one of the blocks on the edge of the park will feature a dramatically pitched roof. The streets and squares are open to pedestrians and cyclists 24 hours a day, but the complex will still adhere to strict new security measures, including tight restrictions on vehicular access. The goal of the architects was to avoid a high-security building, and instead focus on design “that communicates Norwegian ideals of transparency and democracy, and that is an inclusive and exemplary workplace” developing the building “based around the words dignified, inviting, friendly and timeless” said Gudmund Stokke, a principal partner of Nordic Office of Architecture and head of Team Urbis.

New York designer, Joe Doucet, created a 3D-printed concrete bench that also functions as a barrier to protect public spaces from VAW attacks. The design is composed of a stack of 3D-printed benches which are attached to each other via steel rods and weigh over one ton. When the benches are hit by a vehicle, they will remain linked to each other and skid along discs to form a barrier – effectively slowing the vehicle. The benches were built at Times Square and are intended to be a discreet alternative to the classic bollards that protect citizens from VAW attacks in pedestrianised areas.

Architecture firm Skidmore, Owings & Merrill has created a biometric technology facility for the US Federal Bureau of Investigation that combines both openness and sunlight into their workspace. Constructed with an existing FBI campus in Clarksburg, West Virginia, the FBI Biometric Technology Centre, houses the division of Criminal Justice Information Services (CJIS) and supports the development of biometric technology. The building has been designed to meet the Department of Defence standards for anti-terrorism force protection. 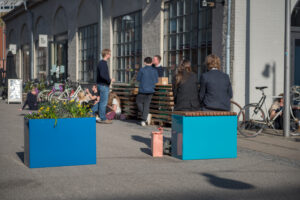 At Unafor, we think its important that HVM solutions don’t look abrasive. Our products are designed to ensure the safety of urban spaces without compromising aesthetics and creativity in design — allowing urban planners and designers to creatively integrate customised HVM solutions within local landscape design. Our innovative certified solutions ensure that public places in our cities maintain their local charm while protecting against the intrusion of hostile vehicles.

How HVM Barriers Are Tested: A Quick Guide to the IWA-14 Rating

All HVM barriers must be crash-tested. This means that they need to undergo testing to ensure they meet specific standards for withstanding a moving vehicle.