Traditional HVM vs. Alternative Security Measures: Which Measures Are Worth Installing?

It is glaringly obvious that HVM measures need to be a part of our city plans in 2022, but it is still unclear to many how to tackle this issue. Traditional HVM measures have seen great pushback from landscape architects and urban designers alike. So, are there better, more effective, measures that we can invest in? 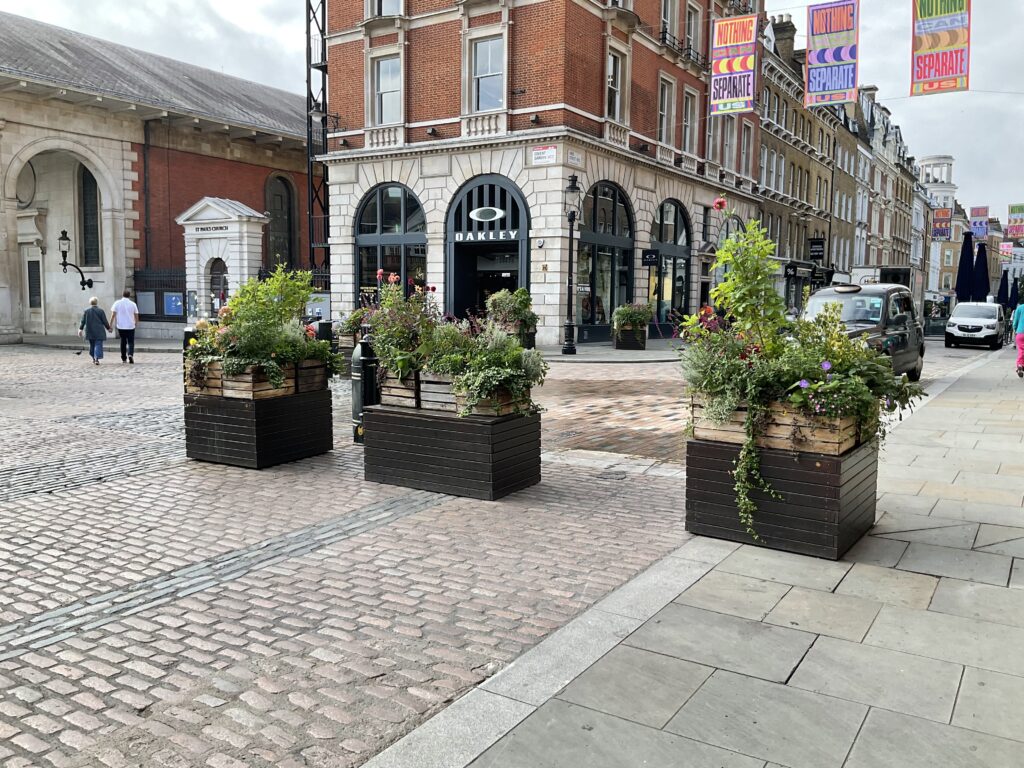 It is not unreasonable to suggest that there is a new and escalating urgency to our discussions about hostile vehicle mitigation (HVM). With the increased string of attacks, the newest one happening this week at an anti-vax protest, security officials, landscape architects, and urban designers are seeking effective solutions to this imminent threat. It is, therefore, important to emphasize that prevention is not the aim of security measures – mitigation is. Security officials cannot aim to prevent the attack (this would be an incredibly difficult task) but they aim to minimize the casualties and damage. Unfortunately, many traditional HVM measures on the market today are disruptive and costly. In fact, there are countless examples of pushback on security measures around the UK, despite the protection they provide.

The Reality of Vehicle Attacks and Collisions in 2022

Before comparing traditional HVM measures to alternative measures, it is worth asking whether such security measures even merit the disruption and investment it occurs on our cities. Are there currently enough vehicle attacks to warrant the expense of wide-scale HVM measures? Brian Michael Jenkins, who is the Senior Advisor to the RAND President, points out that in his recent search of public databases, there have approximately been 40 deliberate vehicle attacks by terrorists worldwide since 2000. These attacks have resulted in a total of 167 deaths, with an average of four per incident. Jenkins explains that the danger lies in the ease of execution – vehicle attacks are relatively low-skill. As such, a hostile vehicle attack doesn’t just create great damage, but it is one that anyone can carry out.

In addition to planned-out attacks, car collisions are a considerable global problem – 6,000 pedestrians die a year after being struck by vehicles in the United States. This is a number that has been expected to increase since 2016, and is currently still increasing in the United States. These high numbers are mainly due to increased cell phone usage by pedestrians and drivers, as well as drunk drivers, who are now responsible for 15% of all pedestrian deaths.

It is glaringly obvious that HVM measures need to be a part of our city plans in 2022, but it is still unclear to many how to tackle this issue. Traditional HVM measures have seen great pushback from landscape architects and urban designers alike. So, are there better, more effective, measures that we can invest in? Below is an evaluation of five alternative measures that have been used to mitigate hostile vehicles.

Armed police at a high-risk event can be deployed to increase the surveillance and respond quickly to any threat that may occur. For example, in November 2021, armed police as well as hostile vehicle mitigation barriers were deployed in Lumiere in Durham. However, when it comes to a car or truck moving at high speeds with the potential of veering into pedestrians, a situation can quickly escalate, and casualties can happen within seconds. As such, although armed police can respond quickly to a threat, they will not be able to prevent an attack of this type. Furthermore, armed police may impact the citizens’ perception of safety. Often, officers patrolling an area with weapons will only increase fear. As Labour Party Politician, Lord Harris of Haringey, put it when responding to a proposal to increase armed police in London in 2018, “It would be seen as provocative. It will inspire fear rather than reassurance. It will hinder community confidence and do little in itself to reduce the number of violent incidents.”

Hard measures, such as traditional HVM measures like bollards, are often used for two purposes: to reduce the capability of the attacker to achieve their goal and to achieve a degree of psychological deterrent. However, hard measures can often be expensive and create a hostile environment. Instead, soft measures usually incorporate surveillance, access control, and data collection. Crime Prevention Through Environmental Design (CPTED), for example, provide valuable design principles that can have a mitigation effect on the ‘intent’ of a potential offender. CPTED designers typically focus on softer ‘natural’ mitigation measures rather than hard structural barriers. Furthermore, companies like AHVVA (Automated Hostile Vehicle Vector Analysis), have created technology that use geospatial data to perform vehicle threat and vector analysis for any area in the world. AHVVA’s technology analyses thousands of possible attack vectors, calculating potential speed kinetic energy, likelihood, model vehicle behaviour (such as velocity and momentum) and risk ratings. Results are then returned in an interactive map where users can explore the analysis – essentially providing a rapid vehicle risk analysis.

Despite this, surveillance efforts and data collection are often morally objectionable if we look at from a civil rights framework. As Dr. Rainhard Kreissl, Director at VICESSE, puts it “often it is unclear whether the information collected is correct, reliable and whether fundamental rights of privacy and data protection can be honoured…” Furthermore, the United Nations Office of Drugs and Crime, note 12 issues pertaining to surveillance, one being that GPS surveillance has the potential to interfere seriously with privacy as well as rights to freedom, posing major rule of law concerns.

On a more ambitious level, cities can widen security efforts by implementing checkpoints that will conduct vehicle searches combined with surveillance measures. Being able to detect hostile activity early on may be an essential part of mitigating a hostile vehicle attack. As such, surveillance detection (SD) and checkpoints, could be critical to successful intelligence collection, counter terrorism, and security operations. For example, during the IRA’s campaign, “rings of steel” encircled downtown Belfast and later the financial district of London. Short of permanent measures, checkpoints can be used to detect suspicious activity and even drunk drivers. Yet, as previously argued, increased surveillance is a controversial topic and often a measure that is met with pushback.

Instead of using traditional HVM measures, vehicles may be used at high-risk events as mitigation to a vehicle attack. Police cars, for example, are used to prevent other vehicles from accessing a certain area – the vehicles can be positioned strategically around an event and can be an effective temporary security measure. However, when using vehicles as an HVM measure, it is important to consider the fuel load of the vehicle. This is because, if a vehicle with fuel on board is impacted by a vehicle driving at high speeds, the potential for an explosion is large. Furthermore, flawed positioning of the vehicle may result in access issues (especially in light of an emergency that requires an ambulance), unachievable turning arcs, and deployment on circulation routes. Finally, police cars or other vehicles used as HVM are non-rated products – meaning their stopping power is untested and unknown. Essentially, it is impossible to know whether a vehicle can effectively stop a vehicle driving at high speeds.

Speed bumps can be installed, slowing down and increasing traffic, and potentially impeding a terrorists armed with a vehicle. However, as pointed out by Australia’s National Security, “the driver of a hostile vehicle may not necessarily obey traffic road rules. There is an inherent danger in not taking this into account when conducting a site assessment. All too often, security measures have been installed under the assumption that a vehicle will not, for example, travel the wrong way down a one-way street.” As such, traffic management may slow down a hostile vehicle – yet, alone, it may not be sufficient in successfully mitigating a vehicle attack.

Things to Consider When Making Comparisons: Risk and Proportionality

To start off, all decision-making should be driven by risk assessments that are undertaken by competent and experienced professionals. Whether the measures implemented are HVM barriers, armed police, or checkpoints, a risk assessment should be at the heart of a security plan. Take, for example, the United Kingdom. There are Counter Security Coordinators (CT SecCos) within their police force, who are able to develop holistic security plans that aim to manage, minimize, and mitigate the risk in case of a hostile vehicle attack or other terror threats. Such resources are a significant first step in planning a security plan and choosing the correct measure for event and festival organizers.

Second to consider is proportionality, which is inextricably linked to risk assessment. Proportionality is about considering how appropriate a response to the risk of a vehicle attack is. If, for example, there is an informed and credible threat of an attack, most security officials will recommend a properly rated (PAS 68, IWA 149) HVM measure. On the other hand, if there is a low risk of a vehicle attack, a visual deterrent or simply a non-rated measure may be appropriate.

There are many options that can prevent a hostile vehicle – not only traditional HVM Measures. All measures carry their own unique benefits and downfalls. However, any security plan needs to be risk-assessed by a qualified and competent security professional. This will ensure that the correct form of HVM is decided upon – traditional or not.